The profession in numbers 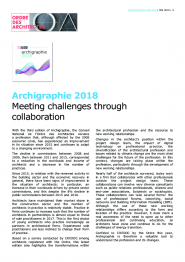 There were 29,831 registered architects in France at the end of 2013. About 1,200 HMONP students graduate each year from schools of architecture and there are about 18,000 undergraduate students.

An additional 995 architects were registered by the Ordre during 2013. On average, the Ordre records 800 registrations each year including 500 recent graduates.

The profession remains predominantly male, despite a steady growth in the number of female architects: 25% of architects were women in 2013, compared to 7.5% in 1983. Among the new registrations in 2009, there were 39% women.

France has 45.1 architects per 100,000 inhabitants registered with the Ordre compared to, on average, 82 within the European Union.

Although the sole practitioner, "liberal", remains the bulk of the profession, this form of practice is in marked decline: 51% of registered architects in 2013 compared to 83% in 1983. In contrast, over the same period, the proportion of architects in partnership increased from 5% in 1983 to 38% in 2013. Also, in 2013, 4% were civil servants and 4% salaried architects

The volume of construction work declared by architects to the Mutuelle des Architectes Français (MAF) was 56.2 billion euros in 2013 (a decrease of 1.4% compared to the previous year). According to the MAF*, the market share of architects (MAF policy holders) in overall building activity was 44.7% in 2013; 75.7% in new construction and 20.7% in the field of maintenance and renovation.

The market share of construction work declared by architects practicing in companies continues to increase sharply to the detriment of sole practionners: 70.5% compared to 29.5%.

Architects Income:
In 2011, the average income of architects was 45,000 euros according to the Caisse Interprofessionnelle de Prévoyance et d'Assurance Vieillesse des Professions Libérales (CIPAV) with a marked disparity between the sexes because women's income was 27,700 euros compared to 51,000 euros for men.
However, the average annual income is only 28,600 euros.

According to the Association Régionale Agréée Des Professions Libérales (ARAPL), architects practicing in liberal (sole practitioners) had an average annual turnover of 154,000 euros in 2012 (in continuing decline since 2008 when the average turnover amounted to 180,000 euros).

Architectural practices remain small since, on average, there are fewer than two employees per practice (IFOP survey for CNOA)